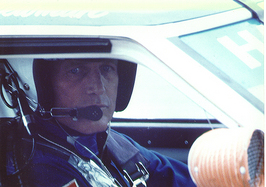 Just click the image to see a larger size version.

I was reading The Washington Post this morning when I read the headline:
Academy-Award Winning Actor Paul Newman Dies at 83

Paul Newman, 83, the actor and sex symbol who surged to stardom by playing loners as well as criminal and moral outlaws — anything to downplay his astonishing looks — died of cancer Friday at his farmhouse near Westport, Conn.

of course, I’ll always remember him, cool and relaxed, waiting on the start line at Summit Point, from this photo I took many years ago …

Yeah – new addition to the fleet – found this up in Abingdon, MD – some kinda 1.8 liter econo-car from Germany – rated 38mpg on the highway …
Its not a NEW car – its from 1995 – but squeezing gas is a GOOD thing these days! I’ve got a few things to do and get it through inspection, but – based on the nearly 2 hour drive getting it home, what a FUN car!! 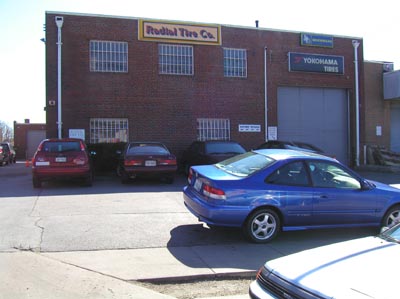 Picture of my car where I got the new tires and alloy wheels
the always busy Radial Tire Company – Brookville Road in Silver Spring, MD . Great folks!

My car was stolen off the parking lot at work Nov 29th and stripped. The Allstate Adjuster I was just working with decided to fix the car, even tho Sandy at the dealership told them (and me) that these kinds of extensive rebuilds can take a long to locate all the parts. The 2000 Honda SI is apparently still worth a huge part of what it sold for – I paid $16k for it new in May 2000, and now, 5 years & 75k miles later its bluebook value is still around $12,000! Its a great car – averages 30 miles-per-gallon and has the vTec engine – stomp the gas pedal and when you hit 4,500 rpm (to around 7000rpm) it sounds and feels like a big 4 barrel carb or supercharger has kicked in. A very quick little car.

END_OF_DOCUMENT_TOKEN_TO_BE_REPLACED

“ GM Plans to Lower Prices on Most Vehicles“
“General Motors Corp., the world’s biggest automaker, said Tuesday that it will lower the prices on 57 of its 76 models in North America in an effort to boost its sliding market share and wean buyers off expensive incentives.”
(quote from AP News on the WaPo site).

Of course – that didn’t help me. I WANTED to buy GM. After my car was stolen in November I was in the market for a new small wagon. I’d seen pictures of the Chevy HHR and I’d heard that GM had really improved since the bad cars they churned out in the 70s (Vega, Monza, etc) .. I wanted to give them a fair chance – so I went to Jim McKay Chevrolet to test drive a new HHR with the bigger 2.4l 4 cyl.

It had good pickup – but it felt claustrophobic – visibility seemed poor and it felt very plasticky.
The A pillars were too thick and hard to see around, the rearview mirror was in the way – the windshield seemed too low – it just didn’t seem like a comfortable car to me. It didn’t feel like a car I would still enjoy driving in 10 years – or even in 2 years. The “red Tag sale” promotional discount of $1500 or whatever it was didn’t matter if I didn’t like the car.

END_OF_DOCUMENT_TOKEN_TO_BE_REPLACED 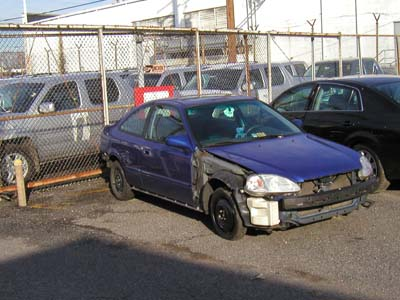 Yep – my poor car was stolen.
The police found the car, its been recovered (and towed to a Honda dealer)…
The thieves stripped it …!

END_OF_DOCUMENT_TOKEN_TO_BE_REPLACED

I originally bought the 2000 Civic SI car in May 2000 – we were still renters then – and I wanted a sporty small car to commute in. My commute was about 40 miles daily, and I wanted a car that got reasonable gas mileage, but had passing power at speed on the interstate (part of my commute is on 495, aka the Washington Beltway) . My previous car, a red 1990 Honda Civic SI, had over 120k miles at that time. The 1990 Civic SI was a hatchback model, a little sport-wagon, a very sensible car design I adore.
(See my Car-buff page for more on sportswagons. )
The 2000 Civic SI was a 2door Coupe body, not the hatchback style I prefered. But we needed another car, and because the previous SI had been so solid and reliable, after a bit of comparision shopping, I bought it.

END_OF_DOCUMENT_TOKEN_TO_BE_REPLACED

Talk about a different way to end a day at work.
I walk out of the building at 2:45 – and find an empty parking space where I left my car!
Seems that some slimeball snatched my car! (a 2000 Honda Civic SI).

Called the police, called Emma for a ride home, called my Insurance company …
went home and made some more calls – then Emma took me to get a rental car until this settles down a bit.
Its a bit early but – Merry Christmas … ? 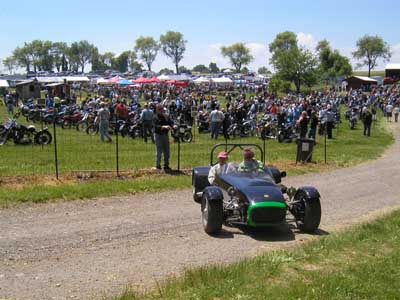 One of the fun things about our relationship is just how many quirky things Emma and I both enjoy.

Last Christmas I gave Emma the A&E box set of The Prisoner, Patrick McGoohan’s strange British spy show from 1967. The basic concept (shown in the lead-in credits every week) was McGoohan plays a “secret agent” who angrily resigns from the service, returns to his flat to pack and is gassed through the keyhole. When he awakes and raises the blinds, he discovers he is in a mysterious village, where the folks in charge work him over physically and psychologically to make hime explain why he resigned. The twist (there’s always a twist!), is that he never knows who runs The Village, if its his side trying to crack him, or the opposition.

One fun part is during the starting credits he roars through London in the “car he built himself”, a Lotus Super Seven.

When we went to the Motorcycle Day show in Maryland a few weeks back, I spotted a Super Seven parked in the shade and went over to take pictures. Emma was intrigued, she’d never seen one in “the wild”, she’d only seen one during the the credits for The Prisoner and didn’t know it was a “regular” car!