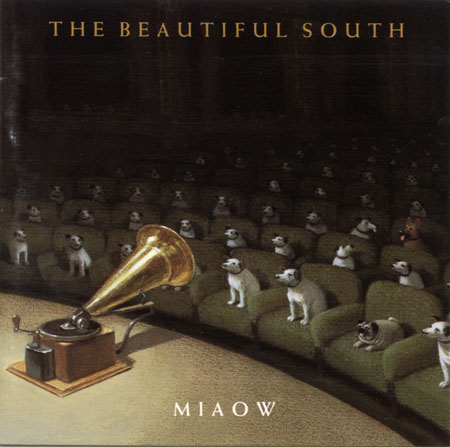 You’ve gotta love this update on the old RCA Logo. But for contractual reasons, this album art was prohibited and the band went with a couple dogs in a lifeboat in a stormy sea. 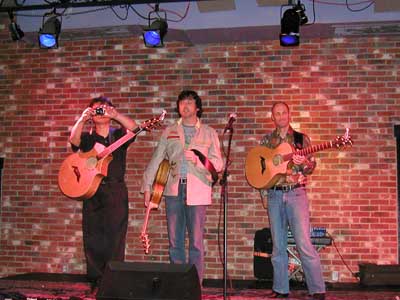 As usual, click the image to see a doublesize version. 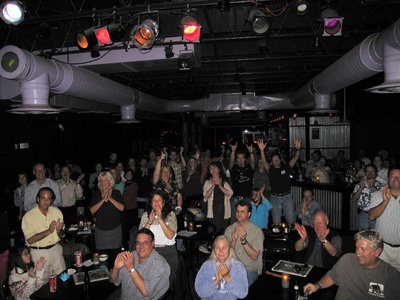 Lower picture shot by Hidayo while I was shooting mine!.

Time for a Date night out! A month back I heard the California Guitar Trio were coming to Jammin’ Java in Vienna again –
we’d seen them there 2 years ago and had a great time –
Emma and I were really looking forward to a fun night out with music. The show was at 8PM – we got there around 6:30 and got a table 1 row back from the stage – but its a small club – I don’t think there are any bad seats there. The night was great fun – I highly recommend seeing them any time they come to your town! 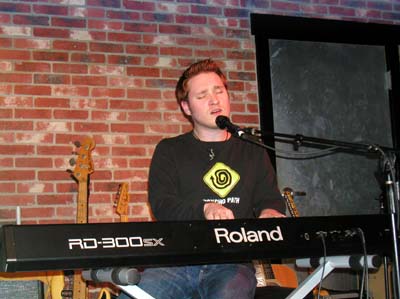 This weekend was our 9th Anniversary – 9 years ago on April 1st, Emma and I became a couple.
To celebrate, we bought tickets to see Casey Stratton at Jammin’ Java in Vienna, VA!

Casey posted the setlist as:
The Everlasting Voices / The Hardest Part
Cellophane
Sunflower
When the End Arrives
Harvest
Shenandoah
Opaline
Pray For Rain

Its a great show, Casey is very talented and has an amazing voice – if he comes to your town, by all means, go see the show!

Who are these folks, what is their background – what do THEY mean when they say “alternative” ..
They are just starting their website at
http://www.alternativebroadcasting.org/

Have you been complaining about the radio stations in the Northern VA/DC area for a while? Well, so have we and we’ve decided to do something to fix the problem. Alternative Broadcasting will be one of the few non-profit, locally-owned radio station this area has seen in. Our objective? To rescue Northern VA by providing an alternative to the highly commercialized environment of radio in the area. Not only will Alternative Broadcasting bring you everything you loved about the late 99.1WHFS, but we also plan on providing all the genres derived from rock, including punk rock, emo, screamo, prog rock, metal, indie, ska, Brit pop, classic rock, and even music from local bands! Will any other station offer you that kind of musical diversity?

Alternative Broadcasting will be launched in early November from right here on our web site! However, we’ll need your support to get our commercial-free station on the FM airwaves. Wanna help? Have some spare change? Make a donation by visiting our Donate page. Every penny counts and it all goes towards making Alternative Broadcasting a reality. Together, we can bring the DC area the kind of radio station it really deserves. 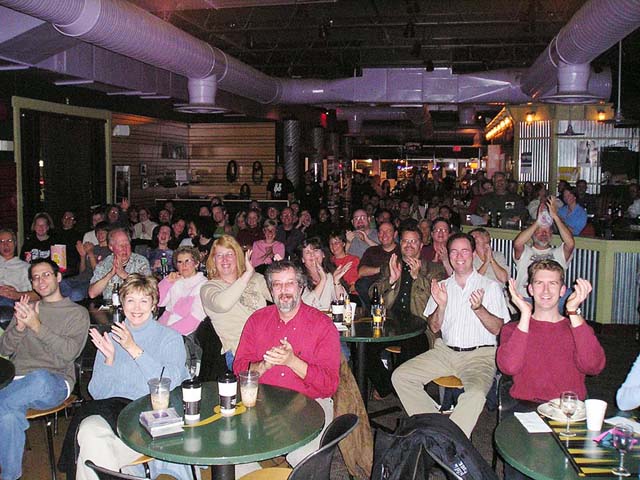 What a great night!

Last week Emma noticed that the California Guitar Trio were scheduled to play at Jammin’ Java, a local coffeehouse (in Vienna, VA) on Nov 10th. We don’t usually do weeknight concerts as I get up for work at 5am, but with the Veterans Day holiday on Nov 11th, it was very possible. I bought tickets online, and we were in a short line at 7PM.

The show started around 7:40 with Bert Lam playing a number of classical pieces (I believe Bach – but I ccouldn’t tell you the names). Gorgeous stuff beautifully played.

Next up was Tom Griesgraber, an amazing artist, playing a 12 string Chapman Stick. Follow the link for more info about Tom and his music, or about the Chapman stick in general. Tom put on a fine show, moving the hammered string style of the stick with a number of live loopings a la Frippertronics – great stuff! We bought his CD afterwards

But the real joy was the CGT. I’ve been a fan of their stuff since I heard “Train from Lamy Suite” on a DGM sampler in the 90s … but I’ve missed them for one reason or another everytime they’ve been in town.
But we had great seats, and they played fantastic! Some old stuff (even “Lamy Suite”!), and some new stuff off their new Whitewater CD.
They played for 2 hours without a break, even an accoutic number, then came back for a 2 song encore including Bohemian Rhapsody with the audience doing a sing-a-long as they played.

At the end, Hideyo took pictures of the audience for the “RoadCam” part of his diary. Emma and I are center of the picture (with Mark and JD) at the table 1 row back from the front. A real fun night!

We got tickets for the Sunday night show!!

NPR’s All Things Considered
Tinariwen formed in the refugee camps of Libya and Algeria. They’ve carried instruments and rifles in their lives, and fought for the freedom of their Tuareg people. Their music is a mix of North African blues and at times reggae-influenced. Chris Nickson reviews their CD, Amassakoul.

Sometimes I think I must be the last to hear of a promising new artist. I’m hardly plugged into the media music machine – I don’t listen to our local radio stations in the car (just NPR or CDs usually), and I don’t watch the media hype shows on TV. Heck, I didn’t catch one episode of American Idle or any of its clones …

But while browsing LiveJournals earlier this week, one writer mentioned an amazing album by an artist named Casey Stratton. I googled him and found Casey’s official (Sony) website and heard samples from his album. Google also showed a Casey fansite with more info and some live songs and demos – real breathtaking stuff. Then I found Casey has a Live Journal, so I’ve been reading that the last few days

I went to Amazon and bought the album, then found a previous album is available through eBay, so I bought that one last night – (they say all money for that goes to the artist).

But don’t take my praises for Casey’s music – go to the Sony site or the LatitudeLine.com site and listen to Casey’s music and make your own mind up. Casey sings with a high voice, known as contralto

Saw this on CrookedTimber.org
– from somewhere else in blogland:

I wanna be cremated

Nothin to do nowhere to go ho

I wanna be cremated …

Johnny Ramone, 55, a guitarist and founding member of the Ramones, the seminal New York rock-and-roll band that practically defined the punk movement of the 1970s, died Sept. 15 of prostate cancer at his home in Los Angeles.

On Monday Jan 26, Rock legends Peter Gabriel and Brian Eno plan to launch a musicians’ union to help artists stand their ground in the digital age. The union will be called Mudda, short for “magnificent union of digitally downloading artists”.


Threee cheers for the Evolution of the music industry – from Entertainment syndicate – to Artists direct outlet
Cut the Middlemen … and the RIAA heavies!

END_OF_DOCUMENT_TOKEN_TO_BE_REPLACED

This pursuit of the RIAA to fund themselves by suing any and all peer-peer fileshare users is getting rediculous. Its bad enough that the Radio business has turned into shills for the blonde-blue-eyed clone-of-the-month. Its bad enough that the music industry has been systematically ripping off the artists that made the music in the first place (see Courtney Love, see Robert Fripp, etc).
Now the concept of the dead-but still struggling music bidness trying to extort money from all possible sources has completely sickened me. I hearby give the music bidness notice. I will no longer buy commercial recordings, I will not steal
the music, I will not trade the music, I will just – walk away and ignore the music
business and no longer provide ANY of my hard earned money to sponsor such scum..