My partner Emma has reached the end of her training and waiting – on August 28th, on her birthday, she becomes ordained as a full Reverend in the Metropolitan Community Church. Its a real big deal to both of us, and to her family, who are travelling for the occasion. We’re also having some MCC pastors and elders travelling in from a distance. Rev Elder Darlene Garner (who was the pastor when we joined MCC NoVA back in 1996) is flying in from Monterrey Mexico, and some other surprises are expected. Even my Dad is coming to see the service, and he’s not regular church-going folks!

As you might imagine, I’ll be away from the computer most of the weekend. My hands will be busy with family and guests and such – – but I’ll post pictures once I have them.

In January I wrote about reading Gnosticsm, various sacred writings that were removed from the bible around the 3rd century. I had been particularly intrigued by the Gospel of Thomas as it had a (to me) very Eastern feel.

While reading another blog this morning I ran across a link to Mystic Cowboy weblog, and in reading the archives there, I found a complete version of

the “Scholars’ Translation of the Gospel of Thomas

66. Jesus said, “Show me the stone that the builders rejected: that is the keystone.”

90. Jesus said, “Come to me, for my yoke is comfortable and my lordship is gentle, and you will find rest for yourselves.”

I’ve gotten quite intrigued by the Gospel of Thomas – one of the documents found at Nag Hammadi in 1945.
Its a series of 114 sayings from the early years of Christianity – and has what we think of now as a very eastern feeling – many of them sound very much like Zen koans.

Anyway – its quite fascinating stuff! I’ll write more as I get time to read further.
This stuff was all considered heretical – much of it was written as a way to find esoteric knowlege, truth, without requiring a need for a larger church community – which wasn’t a desired or helpful view in the early days of the Christian church community. Small wonder these writings disappeared between 340 and 400 CE.

(From a news item in the Manchester Guardian)
Vatican: condoms don’t stop Aids
The Catholic Church is telling people in countries stricken by Aids not to use condoms because they have tiny holes in them through which the HIV virus can pass – potentially exposing thousands of people to risk.

END_OF_DOCUMENT_TOKEN_TO_BE_REPLACED

Wow – History favors the beautiful, the gifted, the beloved …

I went to read Calpernia’s Weblog today and found that my comments, Calpernia’s apology for missing the UCC Speaking engagement, and all info related to that non-event has disappeared from her blog as if it never happened. All that remains is some chitty-chatty froufrou from the adoring fans …

What an intriguing way to view reality!

So much for living an authentic life …

Well – a number of folks came to the Christ Congregational Church (UCC) in Silver Spring, Maryland Sunday night to hear Calpernia Addams speak about Welcoming Transgender Christian – they were welcoming – but Calpernia was a no show.
The Rev Todd Hunter,the pastor of that church, stepped to the pulpit about 10 after 8 and apologized, but said she’d not answered her cellphone and she’d not contacted the church to explain.
Fortunately Pat Conover (of UCC) and Roxanne (of local support group TGEA) spoke to the audience and did their best to answer questions and enlighten the listeners, but it was a bit troubling that Calpernia didn’t show. We were pretty worried about her – there have been a number of incidents of violence to T-people over the years, some transwomen were murdered in DC recently, and sometimes things happen – but she posted an apology to her weblog Monday morning (dated “Sunday Midnight”) so apparently she is ok …
Ah Well … maybe next time?
This is a continuation of the story begun in Calpernia Speaks part 1
http://www.calpernia.com/comments.php?id=P142_0_1_0

Just had a phonecall from my honey who read in today’s Washington Blade that Calpernia Addams is coming to town and will be speaking at a local church about Welcoming T-Christians into a church community.
Here’s what it says in the Events section of the Blade:
"WELCOMING TRANSGENDER CHRISTIANS" will be the focus of a program at Christ Congregational Church, United Church of Christ, on Sunday, Oct. 5, 8 p.m. Guest speaker transgender activist and author Calpernia Addams. 9525 Colesville Road, Silver Spring, Md.
The church website http://www.christ-ucc.org says this:
Transgender Author to Speak
On Sunday, October 5, at 8:00 pm, transgender activist and author, Calpernia Addams, will speak at CCC on "Welcoming Transgender Christians". She was the subject of the critically acclaimed 2003 Showtime film, "Soldier’s Girl". The film tells the story of Addam’s relationship with PVT Barry Winchell, who was murdered in 1999 at Fort Campbell, KY, by fellow soldiers who believed him to be gay. Born in rural Tennessee to a strict Fundamentalist family, Addams served in the Navy in Desert Storm, became an entertainer in Nashville, and now lives in California. She is the author of Mark 947: A Life Shaped by God, Gender, and Force of Will, an autobiographical work of how she came to terms with her gender identity and Christian faith. The title is taken from Mark 9:47 – "If thine eye offend thee, pluck it out". The event at CCC is being sponsored by the Open and Affirming Task Force and the Board for Social Witness.
Calpernia’s Weblog is here:
http://www.calpernia.com/weblog.php

Important things are in store this week.
I asked for a half-day off this afternoon, but didn’t give specifics.
We’d heard about an interesting event at the Washington National Cathedral this afternoon: A Teaching by His Holiness the Dalai Lama Cultivating Peace as an Antidote to Violence. Sounded like an interesting way to spend the 2nd Anniversary of the September 11th attack
The Cathedral doors open at 2:30 and the event starts at 4 pm – and it sounded like an interesting event to attend – we’d never heard the Dalai Lama speak before. So we decided we could work a half-day, take the metro into town and grab some lunch, then catch a bus uptown to the Cathedral. Simple plan and fun together.
I grabbed Emma at 11, and we took the subway to Farragut West, and walked upstairs to International Square for lunch. 30 minutes later we headed outside
and caught the bus. 30 minutes after that the bus dropped us at Mass Avenue, and we saw a l-o-n-g line of people was already there! we walked 3 blocks to the end of the line and took our place … it was just 1:45!
To shorten the story, we did all get in, but it was packed. We heard chanting – a mix of the Tibetan monks throat singing and the Cathedral choir doing simplesong, with a simple sort of synthesizer backing them. Think Enigma, or Eno … We could hear, but just barely – the sound wasn’t that good where we were, and there were flatscreen digital monitors on some of the stone columns – a very future-retro vision.

Transcript, webcast and official pictures of the event 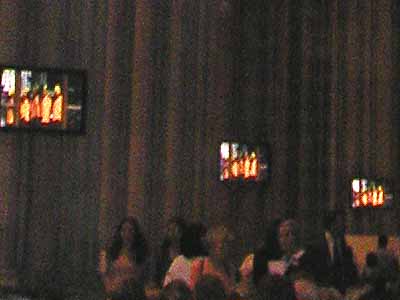 On a related note – we heard of another respected teacher coming to town –
Thich Nhat Hanh giving a public lecture at the Washington Hebrew Congregation, Sun Sept 14 – 7pm We have tickets for this and are looking forward to hearing him speak.