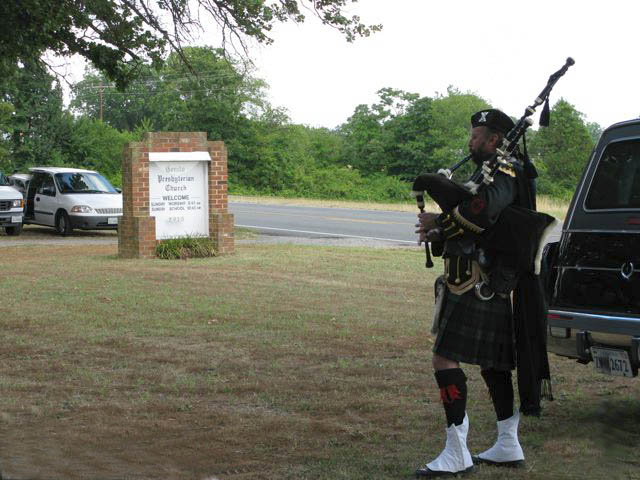 I’ve just gotten back from my father- in-law’s funeral outside Richmond, VA. He was a warm and generous man, a retired Methodist minister of 60 years in the pulpit, and the blessing of his passing was that it was brief, he was not in pain very long, and he died peacefully at home with his daughters beside him. His family has a Scottish heritage, (Clan Chattin) so it was only fitting that he be piped out in style.

He was preceded in death by his wife, Chloe Gwendolyn Rodgers Chattin. He is survived by two daughters, Dawn Gwendolyn Chattin and husband, Scott Nash, and the Rev. Emma Lee Chattin and partner Heather James; and grandchildren, Gwendolyn Chattin Prince, Amber Nash and David Nash; and chosen family members, Wanda Ladd, from whom he received devoted care, Jore Nash Cooper, and Daryl and David Durrett. He is survived by three brothers, Willie A., Robert D. and Rev. Norman S. and his wife, Bernice; as well an abundance of nieces and nephews. He was preceded in death by two brothers, George and James W.; and three sisters, Bertha Willis, Elsie Bray and Minnie Griffith.

He began ministering as a boy preacher and tent evangelist, later joined the United Methodist Church, and served over 60 years in the pulpit at various charges and locations over the Commonwealth of Virginia. Although a retired Elder of the Virginia Conference of the United Methodist Church, he still continued to minister in various ways over recent years to every person that he met.

The family will receive friends on Sunday, June 22, from 2 to 4 p.m. at Bennett & Barden Funeral Home at 3215 Anderson Highway, in Powhatan, Va. There will be a brief gathering and Celebration of Life later at the family’s home in Mosely, Va., at 6 p.m., with the Rev. Garvin Boyd officiating.

The funeral service will be held Monday, June 23, at 4 p.m., at Genito Presbyterian Church, 2910 Genito Road, Powhatan, Va., with the Rev. Fletcher and the Rev. Bob Young officiating. A brief interment will follow at the church cemetery nearby.

If desired, contributions may be made to the Hospice of Virginia or Genito Presbyterian Church.