Dec 1st is traditionally World Aids Day. May I make a gentle suggestion that today would be a great day to make a donation to AmFAR
(the American Foundation for AIDS Research – a non-profit). Or make a donation to AEGIS – the AIDS Education Global Information System. Sister Mary Elizabeth has been doing this good work for many years and can always use a bit of help! 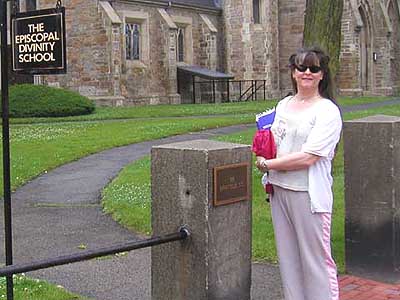 Well, Late Saturday night we got back from our whirlwind tour of Boston – whew! What, you didn’t know about our trip?? I guess I never mentioned it online, only in meatspace –

The reason? My partner Emma had reached the end of her 5 years of classes, study and candidacy (internship) and it was time for her interview to determine if she would become a pastor in the Universal Fellowship of Metropolitan Community Church (UFMCC – or MCC for short). Her interview was scheduled for Sat June 19th in Boston, so we made plans to drive up on Thursday, spend Friday relaxing and seeing the sights, then drive back to Virginia Saturday after her interview.

And the lobster?? I promised her a New England Lobster dinner while we were in Boston, so we dropped by Legal Seafood at Kendall Square in Cambridge and had a fine dinner – lots of fun!

Saturday morning I took her to the MCC interview at the Episcopal Divinity School – and a bit over 1 hour later, she was Reverend-Elect!

The only thing left now is the ordination ceremony – which involves the “laying on of hands” by various peers and mentors. She’s hoping to do have that ceremony in Richmond, as her parents can’t travel far, and she wants her dad to be involved. He retired 2 years ago after 50 years of being a Methodist Minister – so it would be very cool for him to “pass the baton” to her. Tho Emma has lots to do before we get to that point, its still very cool that all went well at the interview … 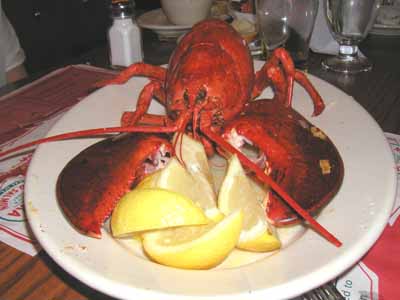 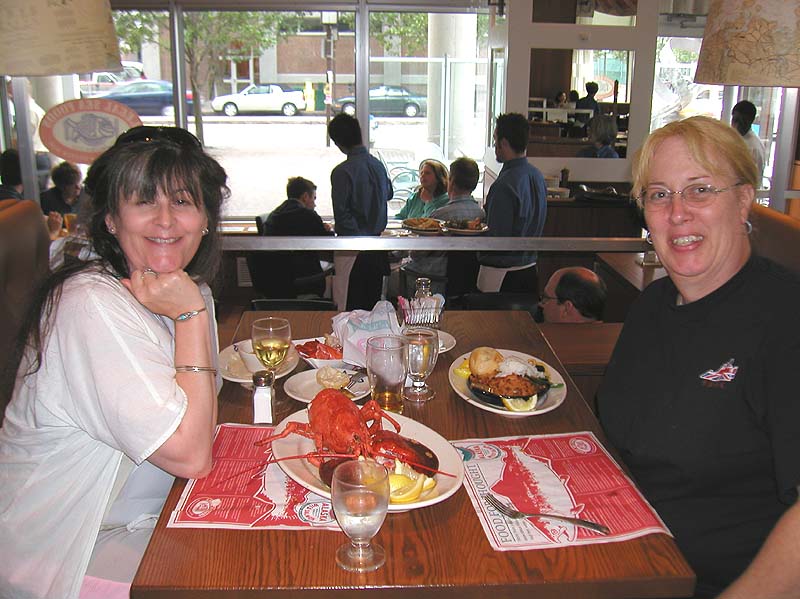 Just a peek at our meal Friday June 18 in Boston, MA (Legal Seafood)

Emma and I went to Dad’s house Saturday to help him finish sorting through all the piles of stuff left from 40 years of living in the same house. I have a scarey collection of old photos now (grin) my original birth certificate (with footprints!), and tons of old books and things .

END_OF_DOCUMENT_TOKEN_TO_BE_REPLACED

Well – my coworkers, the “Gal-Gang” aka, the usual suspects, tarted up my cube last night, in memory of me hitting the big 50. 50? Who’d a thunk it?
I’d kind of hoped to slip right by it – but they knew it was a big deal, so when I walked in this morning, I found a serious lack of subtlety …
(Continue to see pictures) …

END_OF_DOCUMENT_TOKEN_TO_BE_REPLACED

I had a call earlier this week from my Dad … he said there had been some kind of an accident with a gun and my cousin Ronnie was dead. I hadn’t seen him in probably 15 years – there had been a family reunion at his farm in Lovettsville, VA – back when I was still living in Laurel with Jeannie. It was a gorgeous place – a big 10 acre farm – across the road was another farm, and mountains on the horizon …

That was a long time ago for me – before my changes – and a long time ago for him – before he got divorced. That side of my family was baptist/fundamentalist – so I never was particularly close to any of them, but its still a big shock to my aunt and the rest of the family, so, out of respect to the family, Emma and I’ll will be going to the visitation on Sunday.

Dad’s sister’s son (he was the eldest of her two kids) died around 20 years ago – on reflection, I’d say he may have been part of the first wave who died of GRID … no one says anything like that – but looking back on it, he had the signs of being “family”. Dad’s brother had 4 sons, and Ronnie was his eldest … Of course, I’m the eldest of Dad’s kids – and I’ve had my struggles over the years … but since I met Emma and finally sobered up, life has been great.
Anyway – this makes me the remaining eldest of this generation of cousins …

We’ll see how the service and all that goes – I expect to be as low key as possible about everything – but I’m sure there will be the inevitable questions of who I am “… oh – I used to be … ” ” and this is my partner, Emma”
I’ll take it as low key as possible … but its over 10 years since the change
I’ll be polite and educate them gently … “we are very nice people and
we want to go to Massachusettes later this year and get married!”

Busy times – The weather has turned warmer so the snow and ice are finally melting. We walked through the remains of the backyard snow yesterday to check the pond and saw the goldfish peering up through a hole in the ice. After that we headed to Merrifield to see the Tim Burton film “Big Fish”, before it leaves town. The critics at the Washington Post are completely wrong – what a great film – and its not just our opionion – everyone in the theatre sat in their seats to the end of the credits and the houselight came up …

After that brief warm spell, of course – the weather folks are calling for ice storms again later in the week …

I came down with that flu bug New Years weekend, and it stuck with me into this next week! I stayed home sick on Weds and that seemed to help – by Friday I was breathing clearly and by sunday mostly myself. So this weekend I could just take some time for myself and relax … 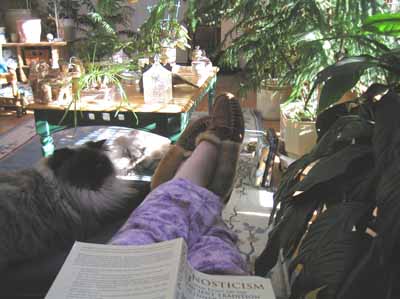 Sometimes there’s nothing finer than time spend reading, sitting in a quiet room, morning sun rising through the trees, surrounded by sleepy kitties, with good coffee and tasty biscuits at hand … ahhh…
and yes – this is the same living room with the floor to ceiling bookshelves – but looking the other way (the bookshelves are behind me) …

Thats Dali Llamma Diva on the hassock, Sir Teddy is sleeping in sunlight under the coffee table …

A demented Quicktime film about elite hunters in Lapland …
http://www.woodpeckerfilm.fi/rare/ or view the large film directly at

I got home from work early and sat in the living room chair, catching up on the paper (the Washington Post). I’ve been redoing the living room over the last month – throwing out the old Doxsey shelves from the Door Store, putting in new floor to ceiling shelves, so it was nice to sit in the open space, put my foot up on a cushion and open the paper. And when my cat Dolly jumped onto my legs a few moments later, it seemed the perfect time to put down the paper, close my eyes, and rest a bit before Emma got home.
Some time later I heard the furnace kick in, and then I heard a rumble starting up. Now, we are near a hospital, there are ‘copters flying in day and night, and we are close enough to Dulles Airport that we hear the air brakes kick in for some of the incoming flights … but this rumble was closer. I actually thought it was bearings in the furnace motor failing … the floor shuddered pretty good for 20 – 30 seconds … and then it faded away. 5 minutes later the phone rang, but I was pretty comfy and drifted back into that half-asleep state …
Emma got home 20 minutes later, and as we fixed dinner, she told me she’d felt the rumble a mile away at church. We figured it was an earthquake, and a few minutes later when I turned on the evening TV news, they confirmed it – a magnitude 4.5 quake near Richmond VA.
We didn’t even lose any of the glassware on our shelves – but between this and all the rain and winds we’ve had this year, it sure has been strange …